As expected, NASA has confirmed the Hubble parameter discrepancy, throwing a very big spanner into the LCDM paradigm. About time! 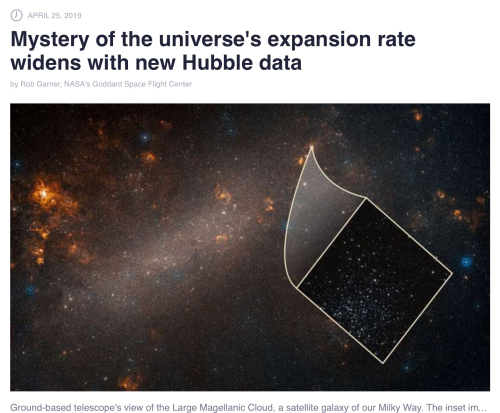 Posted at 09:57 AM in Astrophysics, Cosmology, Quantum Gravity | Permalink | Comments (0)

The latest results from OPERA warranted a comment at Turtle Island, but of course Google would not allow it. (I have been attempting for months to get my Google account verified, but whoever is in charge of it won’t let that happen). Anyway, as far as I can tell from their exclusion plots, they have not definitely excluded the 1eV sterile. Only a less likely candidate.

Posted at 08:01 AM in Astrophysics, Cosmology, Life, Science | Permalink | Comments (2)

I have been enjoying YouTube videos by long term proponents of the Electric Universe theory, who have a good appreciation of the solar and galactic environments, and are generally not afraid to laugh (professionally speaking, not personally) at particle physicists and relativists. This lecture by Bagashov looks at electromagnetic sructures on all scales, starting with the structure of the proton:

Recall that 1/9 of the proton mass is 1/3 of the dynamical quark mass (which appears in the charged lepton Koide formula), suggesting anyon pairs, as we expect from the braid spectrum. This is close to the mass of the muon. Can our quark anyon be a muon? Leptons inside quarks, quarks inside leptons. Cool.

Posted at 10:39 AM in Astrophysics, Cosmology, Quantum Gravity | Permalink | Comments (2) 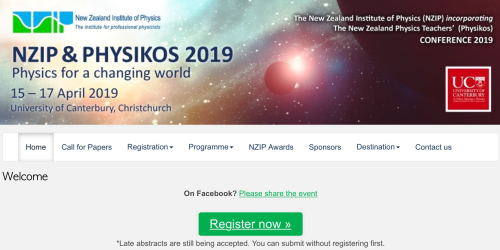 As I happen to be in Christchurch, I really think I should attend this physics conference at UC next month. Unfortunately, at least one of the organisers thinks I’m a crackpot, and I might require some honest support from academics overseas in order to obtain a speaking slot. Get to it! And thanks. 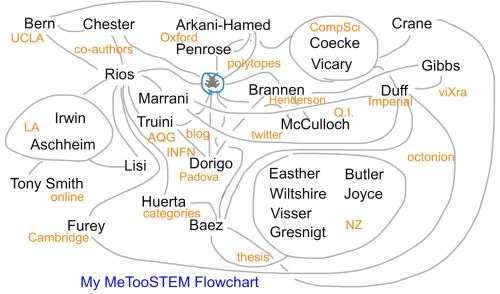 A Visit From Graham 2

Post on CPT symmetry paper and comments by Graham Dungworth. 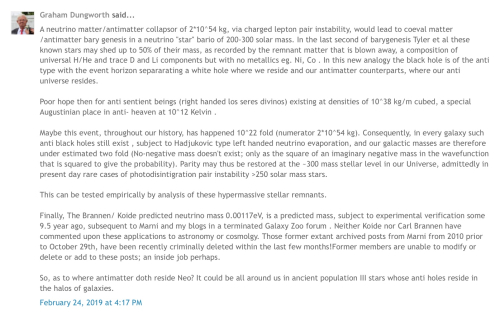 Poor Graham. He must have been quite disgusted to see the deletion of my name from the June 2010 posts at Galaxy Zoo, proving that all this censorship is an Inside Job, as they say. But this is not news to targeted individuals. I realised it had to be an Inside Job years ago, but only after years of denial, mental health issues etc. Facts are facts. Hopefully it is now a little clearer that I cannot get a job because (i) nobody gives me any credit for my groundbreaking work (the psychopaths get handed the rewards) and (ii) the libel is free flowing.

As for the paper mentioned in the linked post: it appeared on the arXiv in March 2018, which happens to be a few months after my neutrino cosmology papers from 2017, and a couple of weeks after my Los Angeles lectures. Well, I suppose it’s nice to see progress being made in cosmology, is it not?

I tried to add a comment below Graham’s comment, about the neutrino CMB correspondence, but the server or browser decided all of a sudden that I did not have access to my Google account, which is strange, because I do seem to have access to it on other apps on this iPad. I digress ...

A Visit From Graham Dungworth 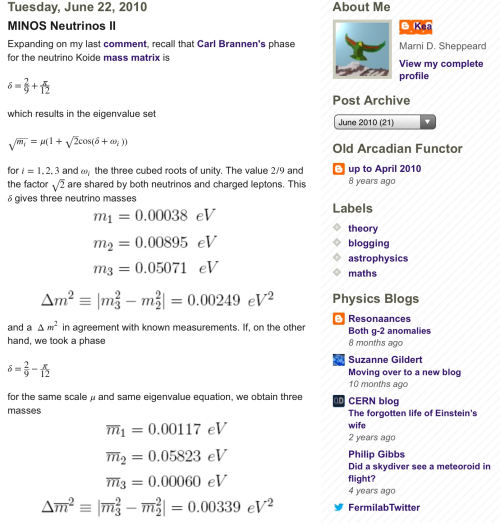 Here is the month of June 2010 on my old physics blog, Arcadian Pseudofunctor. It was here, in June 2010, that I first calculated the mirror neutrino masses in the Koide formalism, finding a value of 0.00117 eV for the central neutrino rest mass. Graham Dungworth was reading my blog, and quickly noted that this number gives the temperature of the CMB. We had a long discussion on his astrophysics forum. Now, however, all references to me on the Galaxy Zoo post have been erased, and the forum makes it look like the whole thing was Graham’s idea, which it most certainly was not. As readers of my blogs know, I have great difficulty contacting Graham, and he may not know about Big Brother’s meddling with the past. Let me be clear here. This history of the neutrino CMB correspondence has been TOTALLY ALTERED to remove my foundational work in theoretical physics.

At the time, and over all the intervening years, there were many witnesses to this story. No doubt some clever white hat can dig up the original pages, which I think were there online only a year ago, or less. Please replace the fake pages with the real ones. And thanks for all the times that you have already done this.

Posted at 09:55 AM in Astrophysics, Cosmology, Quantum Gravity | Permalink | Comments (1)