In the quantum world, everything is discrete. Let’s look at basic coordinates, either on a line or in a plane or in any dimension. On the square below, the first coordinate counts the number of steps taken in the X direction, and the second coordinate the number of steps in the Y direction. The square comes with both the grey coordinates and the path directions. This is called a parity square, because we often use plus and minus signs instead of zeroes and ones. It contains two possible paths from 00 to 11, namely XY or YX. So our path algebra is non commuting. The diagonal of the square represents a set of commuting paths, here either X or Y. 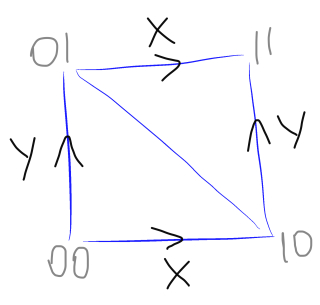 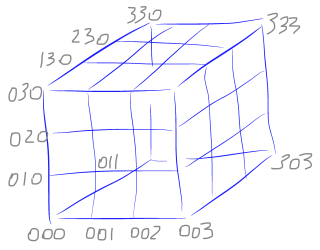 Now the diagonal commuting triangle on this cube is the tetractys diagram: 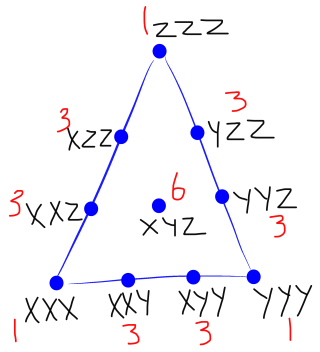 The red numbers count the number of paths on the cube that lead to that vertex. This so called tetractys simplex holds a total of 27 paths from the point 000. Whenever we need non commuting labels on a diagram, we go back to the cubes. For example, a hexagon carrying the six elements of the permutation group on three objects sits on the midpoints of a cube, as shown here. This hexagon is known to physicists as the root diagram for SU(3). 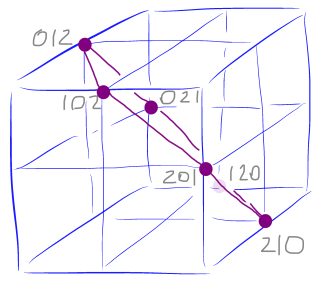 This works in every dimension. There is always a set of words containing each number exactly once, which lists the permutations on d objects, with d being the dimension of the cube. On the diagonal commuting simplex, some words can represent tree pictures. 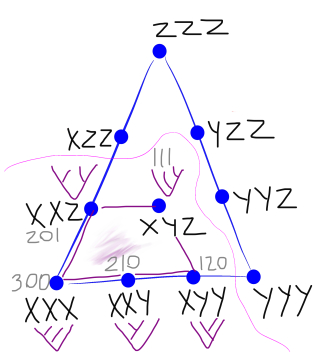 I’ll leave it to you to figure out how we get the trees. Hint: it helps to first draw non commutative forests of trees instead of trees. For these five trees, you need forests built from three points. In the next dimension, the analog of the pentagon of trees is this polytope: 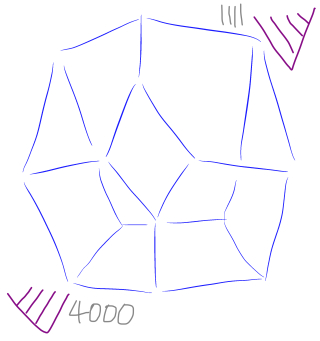 This sequence of polytopes is known as the associahedra, because the rooted trees often represent the bracketing of a string of letters. So now we have a sequence of cubes, a sequence of generalised hexagons, and a sequence of associahedra. These gadgets are already capable of doing a lot of mathematics. Let us go back to the pentagon, and draw all its labels. 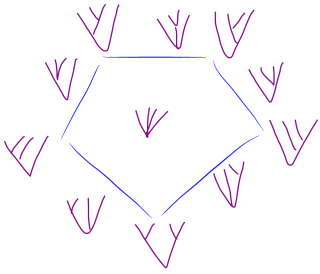 On the vertices of the pentagon, the tree is binary, meaning that every node has two branches coming out of it. On the edges of the pentagon, one internal edge is collapsed in order to represent the path from one tree to another. On the pentagon itself, we end up with only one possible tree with four branches. Thus the whole sequence of associahedra is labelled by the one level trees. The permutohedra sequence of generalised hexagons can also be labelled by rooted trees, by insisting on distinct levels for every internal node on a binary tree.

But there’s more! Our cubes also stand for subsets. Given any set with three elements, there are eight possible subsets of the set, including the empty set and the whole set. These eight subsets label the vertices of a parity cube in three dimensions, just as a two point set would give our original square. That is, the point 01 on the square stands for an element Y in a two point set, while the point 11 stands for the whole set X and Y. The algebra of sets underlies the Boolean logic of a classical computer. You may be familiar with Venn diagrams, which have a circle for each set, and the circles overlap when the two sets have a non empty intersection. 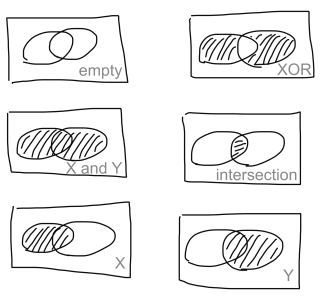 So we can talk about logic without doing any messy calculus or differential equations. It is all algebra, with natural associated diagrams. We will build geometries using these diagrams.