Mathematically speaking, the next paragraph is the hardest one. Whether you read it or skip it, you’ll be fine.

When spacetime was viewed as a classical continuum, the laws of motion were about continuous symmetries. As a particle propagated from point to point, through the continuum, it carried around an auxiliary geometry, dictating the symmetry. For electric charge, in particular, this symmetry is a circle. Each point on the circle represents a phase angle (taking a value from 0 to 2 pi). The electric charge of ordinary particles only comes in multiples of the electron charge, and this discreteness of charge is due to the requirement that a path segment of an electron makes a loop around the auxiliary circle.

Let us draw a diagram of this process. We cannot draw a four dimensional picture, so we imagine that there are only two spatial directions. These directions form a horizontal plane, which shifts downwards as we move through local time. Each point in the plane is replaced by a grey disc, bounded by a circle. We draw two point particles as they propagate through one loop around the boundary circle. Because the interaction of the two loops occured in three dimensions, the two field lines might create a knot.

Now, what if spacetime was secretly three dimensional, and not four dimensional? Remember, there is no such thing as spacetime without matter. The rules of particle propagation are more fundamental than the old image of a spacetime continuum. Since propagation always goes from one place to another, the distance along the direction of propagation measures time, and there is really no need to use up two dimensions when one dimension will suffice. This reduction to three dimensions is known to theorists as the Holographic Principle, and we imagine a boundary encoding of everything in the four dimensional universe.

In three dimensional spacetime, particles can have fractional charges. These particles are called anyons. An actual electron is composed of several knotted anyons, like in the diagram. We use three anyons, each carrying one third of the electron charge, because this is the right starting point to understand why electrons have three possible masses (the electron, the muon and the tau leptons). 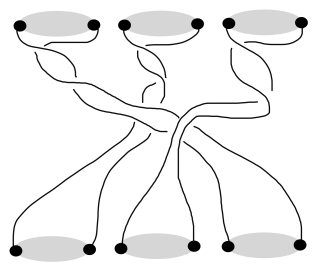 By using two strands on the circle boundary, we represent all three possible charges on a ribbon segment, as if the interval across the grey disc is propagating. Conventionally, an electron has a total charge of -1, using three ribbons of type -1/3. A neutrino is composed only of flat ribbons, as if the auxiliary disc did not exist.

A down quark has an electric charge of 1/3. Since a 1/3 charge may be placed on any of the three anyon ribbons, there are three types of down quark. Physicists call this the color symmetry (the red, green or blue down quark), but in reality it has nothing to do with actual colours. An up quark carries +2/3 electric charge, and there are also three ways to pick two strands out of three.

Now it is time to throw away our old views of spacetime. In the diagrams, we accounted for discrete data, like electric charge. When particles interact, we join knots together to make messier knot diagrams. Where in all that do we need an infinite flat background space modelled on the real numbers? Nowhere. It makes more sense to interpret the diagrams as statements in quantum logic, chosen by a rational observer. In fact, the modern theory of computation uses such diagrams to build circuits for quantum computers. The same diagrams are also used in condensed matter physics, which studies two dimensional space in the laboratory.

Let us summarise the symmetries that actual particles exhibit. Electric charge is conserved in an interaction. Quarks have color symmetry. Neither electrons nor neutrinos carry color, because all three strands in their diagrams carry the same electric charge. This makes them leptons. An electron had lepton number +1, and a positron (the antiparticle of the electron) has lepton number -1. The total lepton number is also conserved. The positron is the opposite knot to the electron, so that we annihilate an electron and positron to get three neutral unknotted strands. This is the photon diagram. 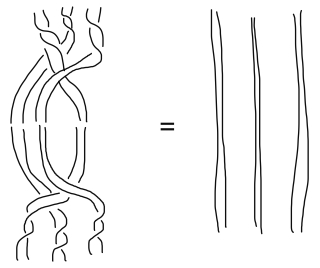 Although composed of three quarks, the proton is analogous to the positron. Both carry a charge of +1. Similarly, the neutron is analogous to the neutrino. The electroweak interactions combine both electric charge and the weak nuclear force, describing how neutrons decay into protons under beta decay. During beta decay, a down quark component of the neutron is turned into an up quark through the W boson. The W boson balances itself by throwing out an electron and an antineutrino. Check for yourself that the total electric charge and total lepton number are equal on both sides of the reaction. So is the total baryon number, which counts particles composed of three quarks. 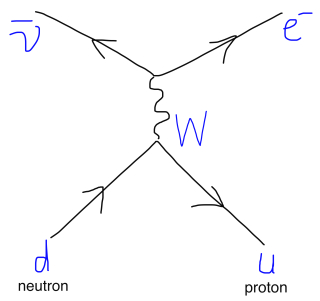 Electric charge, the weak force and the color force combine to form the Standard Model of 20th century particle physics. That is all there is. All the matter in our observable universe is composed of these particles. But these particles do not simply come together locally in an inert background spacetime. To understand how they gain mass, we need the principle of the neutrino CMB correspondence, which explains why the appearance of an antineutrino in beta decay is closely associated with gravity.

The non local way in which strands can knot in three dimensions is essential to classical electromagnetism. Recall that a current of charge in a loop will generate a magnetic field, as in the simplest possible knot diagram below. Here we think of the straight field line as an infinitely long loop, passing through a point at infinity. This puts electric and magnetic charge on the same footing, topologically. The ambient three dimensional space with its extra point at infinity becomes a three dimensional sphere, built from a two dimensional sphere base with a loop at every point on the surface of the sphere.

The complete theory adjoins magnetic charge to electric charge, in mirror pairs of diagrams, noting that we have not yet used the mirror image of the ribbon pictures above (except for the neutrino). An electric magnetic charge pair is a particle called a dyon. The two dimensional mirror surface is the two dimensions that we need for cosmological holography, and dyons are the secret behind the choice of two points on the grey disc. A two dimensional sphere that surrounds a point magnetic charge (a monopole) is just like the flux sphere of Gauss’s law.

By the Uncertainty Principle, a definite mass means a vagueness in local time. Neutrinos have a non zero mass because the temperature of the CMB is non zero in our present cosmological time. We can only make Time a precise concept when we include at least two kinds of universal clock. If the neutrinos were massless, as they are in the Standard Model, there would be no present for the human observer. An absolute zero in temperature lies in our infinite future, in the mind of God, and from Her we have the power to create.