How It All Began

In 1994, as a PhD student in Australia, I attended an ANU Summer School in theoretical physics. David Gross was there, trying to lure us all towards string theory, which was dominant in American institutions but not down under. Claude Itzykson gave an excellent set of lectures on conformal field theories. I could see that string theory had serious flaws, although its dualities were clearly interesting, and was far more taken by the lectures of a local professor on quantum groups. It was my first exposure to category theory.

It quickly became apparent that I needed to spend a few years studying pure mathematics, and so I stopped doing lattice gauge theory to do exactly that. The majority of theorists were still playing with the Standard Model of particle physics in the old fashioned way, ignoring the pressing mathematical questions that were standing in the way of progress.

Eventually I wrote up a new research proposal, to look at an octonionic Chern-Simons action using the higher Hopf fibrations. Of course, at that time, they thought I was mad, and so I ended up moving to New Zealand suffering from depression. In 2002, I finally wound up at the University of Canterbury, where I dived into the direct application of category theory to quantum gravity. In 2003, I spent a year in Canada and France, working with Louis Crane, at a time when our colleagues still thought that category theory was an esoteric side interest. Today it is well known as the foundation of condensed matter physics and quantum computation.

By 2004, science communication online was flourishing. Most particle theorists were divided into two large camps, making slow progress. It was now very clear that categorical methods were the key to a rigorous definition of the Standard Model, and probably the easiest route to understanding quantum gravity. With the help of Ross Street, I finally completed the PhD in 2007, which included my own ground-breaking work on the associahedra.

Unfortunately, the internet was growing, and by 2005 I was being followed everywhere by a dedicated gang of stalkers. Unbeknownst to me at the time, they had every intention of stealing my life from me, and the full backing of a misogynistic cabal government. My only regular contact for fifteen years was my long term colleague Michael Rios, who was a string theory colleague. I was already seriously ill in 2006, suffering bouts of psychosis due to severe malnutrition.

After working at the University of Oxford in 2009 with Bob Coecke‘s group, now almost comatose with depression, I discovered that the system would do anything to keep me out of a theoretical physics department. I was labeled a crackpot. Of course I was usually the only woman in any working group. Not realising that supposedly responsible people were already claiming credit for my years of hard work, and slandering me in many ways, I spent years hopelessly applying for jobs and attempting to draw attention to the flaws in string theory. Along the way, Graham Dungworth and I thought about our neutrino CMB correspondence.

It is not easy to survive the Targeted Individual program. It is designed to either kill or brutally maim, unless of course you are willing to play along. Michael Rios is a psychopath, and after his vindictive essay in 2015, I reported him for stalking and had nothing to do with him for the following three years. I was severely punished. In 2017, living in a tent in the forest entirely alone, I found the strength to wean myself off the psychiatric drugs. Before long, I was happily doing research again, in my tent, on my new iPad. Although a long term sufferer of MKULTRA programs, I did not yet appreciate the hidden military applications of quantum gravity.

The cabal was already into the iPad and could not permit my health to improve. They immediately had me invited me to California, ostensibly to talk about the old work on the associahedra, which had just been recognised as the correct foundation for scattering theory by theorists in Princeton. But since over a decade had passed, I knew they were really interested in my own recent breakthrough on the mathematics behind the neutrino CMB correspondence, which lies at the heart of quantum gravity.

Given my homelessness and isolation, this was without any doubt a human trafficking situation. By now I had so much experience with thought policing, gang stalking, poisoning, radiation, abuse, sleep deprivation torture, malnutrition and trafficking that I was not about to fall for the usual tricks. So Michael set up a personal psychological abuse program in California, all the while getting me to talk about quantum gravity. He has been taking credit for what is entirely my work.

Although I knew exactly what was happening, I already loved him and I always will. No doubt the white men made life hard for him. Of course, he was not communicating with me, and he could not possibly admit what he was doing. But I could see that we shared a vision for quantum gravity. We were both dedicated to it, for different reasons, and we made good progress. In my universe, I will always believe it is our theory, because there were moments when I felt it arrive, and nobody else really understood.

In July 2018 I attended an historic Prague conference on Group Theoretical Methods in Physics, along with Michael Rios, Alessio Marrani, Piero Truini and Raymond Aschheim.

After many months of working overseas under hard conditions, my mind was so traumatised that I could not do much until 2019. As I had anticipated, other people started publishing papers about the new theory, without acknowledging my existence. I was blamed for everything. With only an iPad, living in poverty again, I had zero control over my emails or any sites that I visited. But at least I can sometimes talk about this now, without being accused of paranoia. My #MeToo story is all too common.

While waiting for the future, I continue to work alone on quantum gravity here in Christchurch. A scientist has to respect the truth. 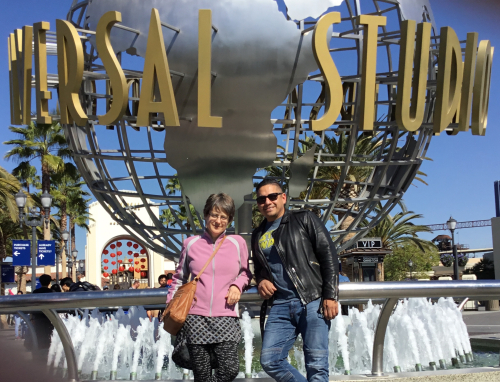